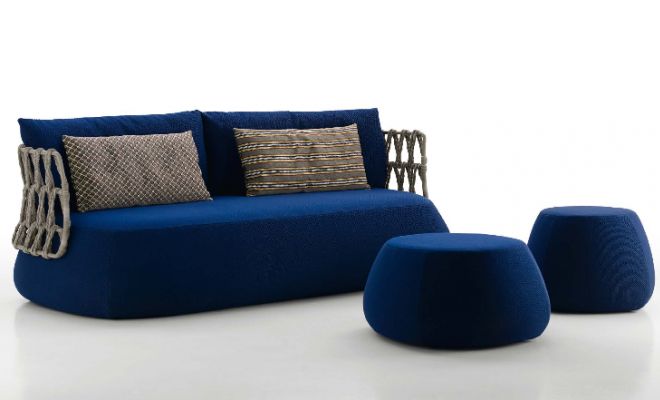 B&B Italia anticipates the innovations that will present at the imminent Milan Design Week, among which are several interesting outdoor 's proposals.

Among them noteworthy is the new outdoor 's seating Fat-Sofa by Patricia Urquiola, a piece that stands out especially for the rounded shapes, soft and sinuous, making it up.

Outdoor version eponymous indoor seating system from which they are ri-taken the forms, the system has been enhanced with an unprecedented proposal of straw.

In fact, the padding seatting is accompanied with a back metal frame on which develops an elaborate plot that creates an interesting play of solids and voids.

The plot, which is made of polyethylene fibers twisted dove gray, has been developed in such a way as to reflect perfectly the idea of ​​lightness, transparency and "dialogue" with the environment that the designers wanted to give to the project, making it one of a kind.

Fat-Sofa Outdoor consists of six elements including a linear sofa, a large relax island,, an armchair with backrest in two heights and a series of pouf's elements in different sizes.

Innovative also the collection of tissues that accompanies it, also made to cover the generous back cushions, creating striking color combinations.