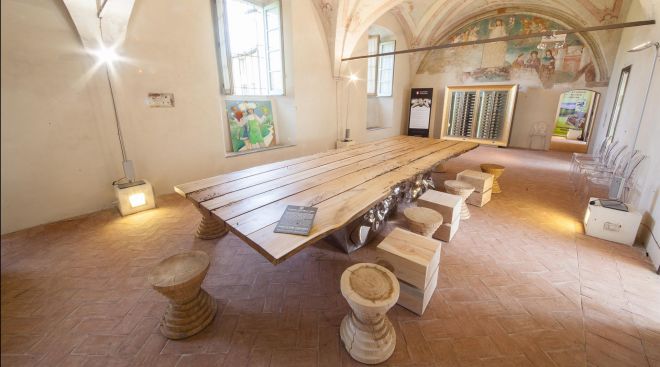 For the second consecutive year, the Riva1920 brand has decorated one of the rooms of the ex Convent of Annunciata in Abbiategrasso (MI), seat of the cultural project Embassy of Taste - Announced Milan.

Sponsored by Maestro Martino, of which the famous star chef Carlo Cracco is founder and President, the project was created to promote and spread the culture of the Territory and the Made in Italy by means of the author's kitchen.

The fact of taste Embassy promotes cooking classes, cultural events and tastings whose protagonists are the food products of Lombardy.
To them are added products from international cuisines that are however used exclusively for projects of cultural contamination.

Riva1920 contributed to furnishing the convent with spectacular "Reflections in Laguna", the table whose top is in fine Briccola, or the oak poles planted on the seabed and used to signal the waterways and tides to the boats in Venice lagoon.

Designed by Helidon Xhixha, the table has a steel base and is coordinated with a series of stools in cedar of Lebanon.