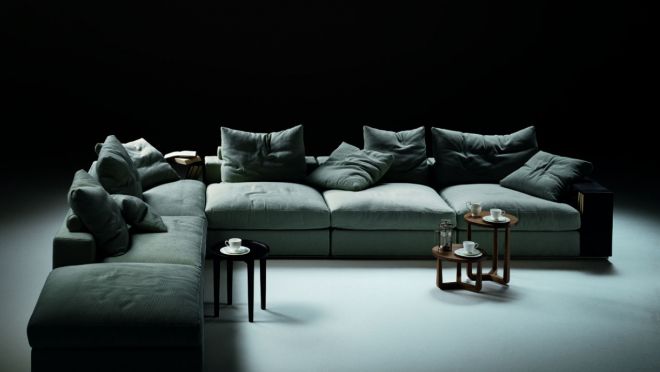 Born in 2001 by the creative ingenuity of the architect Antonio Citterio, the sofa Groundpiece today celebrates 15 years.

Universally recognized icon of Flexform collection Groundpiece is a sofa that can be said to have revolutionized the way we think sofa introducing new proportions and profiles.

Conveniently deep, quite low and unstructured originally with cushions in a very large goose down, Groundpiece introduced a way of sitting on the couch entirely new, more informal on one side and suitable to do more functions on the other.
It so happens that, with Groundpiece, is finally possible, as well as read, relax, watch TV, even work on the computer and maybe dinner.

Merit of certain elements-container low in metal covered with leather, easily insertable in the structure, are able to replace part of the backrest or the armrest, becoming votes supporting surfaces.

Then considered the great importance of this birthday, it is not a coincidence that Flexform has decided to dedicate the first episode of his new web series HOME AT LAST 2016 made for the homonymous advertising campaign, just to the sofa Groundpiece.

In the short film in question it is in fact just the sofa to make protagonist, accepting, in utter naturalness, a father and a son in their moments of relaxation.
The web series goal is give the audience a mood that Flexform wants to evoke in all its products: to feel at home anywhere.