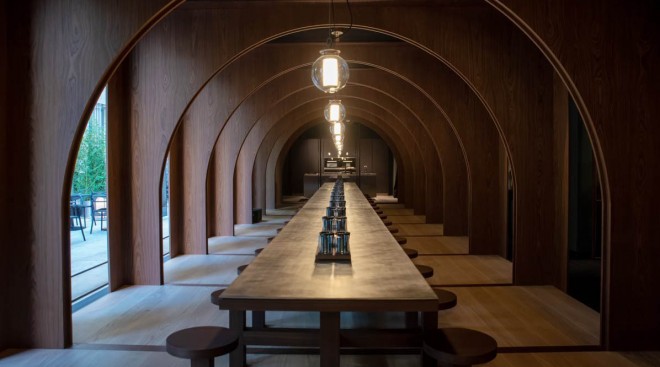 From October 5 to 21, "Elle Decor Grand Hotel - Invisible Rooms" was set up in Milan, in the fashion district, set up in the spaces of the historic Palazzo Morando and designed by the international studio Neri & Hu.

This year, the project, conceived by Elle Decor Italia magazine, has reached its third edition, with the aim of replicating the success obtained in the two previous years.

The theme launched was that of travel and discovery, and, for the occasion, the entire exhibition was inspired by a cult of literature that has influenced many generations of architects: the book by Italo Calvino "The invisible cities". Hence the specific title attributed to the "Invisible Rooms" edition.

Inspired by the narration of the book, the designers Neri & Hu were able to recreate, a truly evocative setting, aimed at amazed the traveler of the 21st century thanks to a design and visual journey, which integrated perfectly with the reconstructed environments.

Poliform contributed to the project with the realization of a large part of the interior furnishings of the installation, such as the forest lounge, the restaurant-aisle, the camera-voyeur, the collector's self-portrait library, up to the courtyard.

The absolute protagonists of the exhibition were the Bristol sofas, the Gaston armchairs and the Artex kitchen, accompanied by as many products of the brand, with deliberately out-of-scale dimensions, created ad hoc to create a true pop-up hotel open to all.

In the background, oriental-inspired atmospheres mixed with exquisitely Western decor, which crosses and illustrates the long history of the hotel industry.