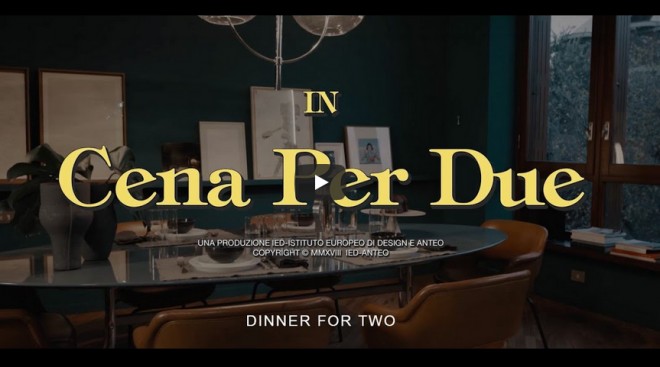 It is not the first time that the B&B Italia brand amazes us with original and unpublished campaigns, ranging from editorial and photographic initiatives to arriving, just like this time, at real film projects.

This is, in fact, the case of "Cena per Due", a brilliant short film made by B&B Italia in collaboration with OffiCine and Elle Decor Italia, which sees, as protagonist, as well as hilarious and very capable actors, Atoll's sofa by Antonio Citterio.

The plot takes place in an elegant apartment in Milan where preparations are underway for a dinner. The owners of the house, Azzurra and Thomas, are constantly moving between the living area and the dining area, where they are putting the finishing touches to the equipment.

On the table 4 covers stand out which immediately reveal to the spectator that dinner will not be for two but will see the likely participation of two other people. Later, it turns out that these last few will be two single friends, Ludovica and Stefano, who have been invited by the hosts, unbeknownst to each other, to meet and get to know each other. In short, the classic "blind date", which will surely reveal unexpected surprises.

The result is a fun and original comedy, which was launched in early December right in the B&B Italia store in Milan and which, to date, has already seen a lot of acclaim from the public.

During the launch, among the guests of the evening there were some of the actors of the comedy including Alessandro Sampaoli, Mercedes Casali and Federico Mariotti. Also present was the young director Niccolò Valentini, an OffiCine student.

The cast then complemented with the B&B Atoll modular sofa, designed by Antonio Citterio, which in the short becomes a confrontation-confrontation ground, between Ludovica and Stefano, in a captivating game of strategies and twists. The sofa therefore at the center of everyday life and, above all, of conviviality.

The film, made with OffiCine, the High Education Laboratory born from the collaboration of Anteo SpazioCinema and Istituto Europeo di Design, also saw the artistic supervision of Silvio Soldini.

To take care of the styling of the set, Elle Decor Italia, the magazine of reference for the furnishing and design panorama, which has commissioned, for the occasion, the Silenzi Studio.